A few months ago, I built my own version of miniKame, a 3D printed quadruped robot powered by an ESP8266. I built it mostly as per the instructions in the GitHub wiki, but redesigned all the parts in Fusion 360 based off of the original FreeCAD files as an exercise to gain experience using Fusion 360. I also didn’t reuse the project’s code as-is, but instead implemented a very small UDP listener for the ESP8266 that simply reads values for the eight servos from an UDP packet. I implemented the actual control software in Python on my computer, which gave me the ability to experiment more quickly, without having to wait for the ESP8266 to finish flashing after every change. Sending servo values via UDP turns out to be fast enough on my WiFi network, with only occasional lags and hickups.

To get my miniKame walking, I ported some of the original C code to Python, which worked well after some fiddling. I got the robot moving.

Other stuff came up and I set the project aside for a while, but a recent conversation with a friend prompted me to look at the code again. I found that I didn’t understand how the code got the robot to move as smoothly as it does anymore. I probably never truly did, I honestly mostly just ported the C code and fiddled around with the values. But I definitely didn’t understand what was going on anymore looking at it after a couple of months had passed. So I went to work reverse engineering the original C code and what I’d ported to Python a few months back. These are my results. 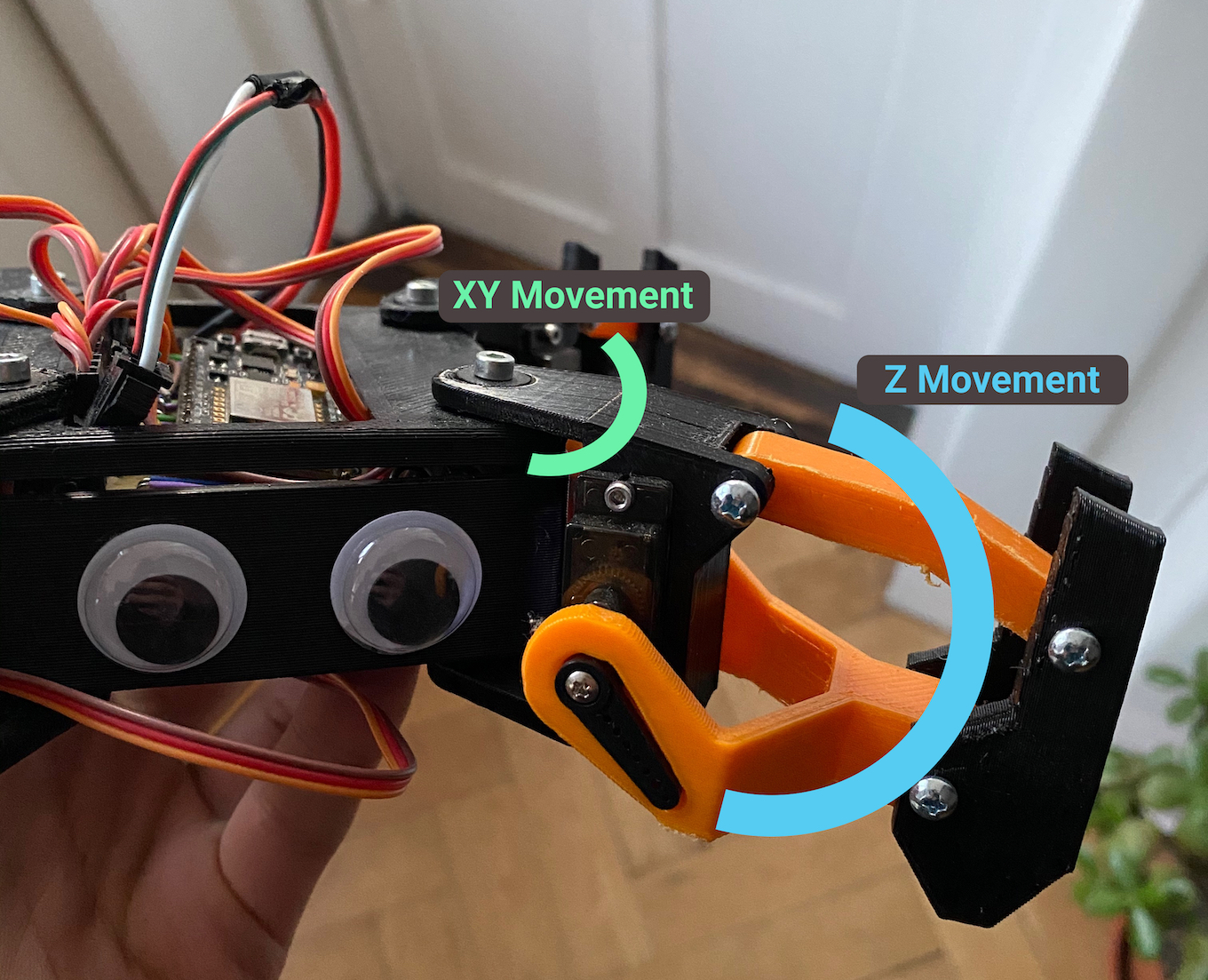 Each servo has a limited useful range of motion due to the way miniKame is constructed – at some point the XY-brace simply cannot move further because it’s up against miniKame’s body. So we’ll have to limit the range of motion in software.

Properties of a sine wave

First, some basics about sine wave. Most of this will probably be familiar from high school. We will discuss amplitude, period, phase shift, and offset of a sine wave2. Feel free to skip this part if you’re comfortable with those terms.

We can get a basic sine wave using the formula y(t) = sin(t).

This plot shows the value of sin(t) from 0 to 10 * π. An unmodified sine wave will range from -1 to 1, starting at zero and reaching zero again for every multiple of π.

We can introduce a few parameters to modify the sine wave. First, we’ll talk about the period. The period is the distance on the x axis between two peaks on the y axis. In the example above that’d be 2π: the first peak occurs at 1.5π, the second peak at 3.5π. You can play around with the period in the following example. I’ve changed the values a bit so that we’re no longer dealing in multiples of π, but in nice round numbers instead.

Next up: amplitude. The amplitude of a sine wave determines the height of its peaks and the depth of its valleys. The default amplitude of an unmodified sine wave is 1, which is why the plots above show the sine wave ranging from -1 to 1.

Third, we can shift the sine wave around on the x axis. This is called a phase shift, or simply phase. The phase is specified in radians. A phase shift of 1/2π means that at x = 0 the sine wave will be at its maximum (as determined by the amplitude), instead of at zero.

Finally, we can shift the whole wave vertically. Right now it’s always centered around zero on the y axis, which we can change using an offset.

How sine waves are used to move miniKame’s braces

After this refresher on sine waves: How do we actually use sine waves to move the robot? Let’s start with the braces, the parts that move a leg in the X-Y-plane.

Using a sine wave to move these is actually pretty straightforward: We tweak the amplitude until we get the desired range of motion out of the servo, using the offset to adjust for its initial zero position (which can always vary a bit because of different mounting positions). Then we tweak the period until the speed of motion is just right.

How sine waves are used to move miniKame’s feet

Now we can move our legs in the X-Y-plane by rotating the braces. To actually move the robot forward, we also have to move its feet. What we want is to have the feet touch the ground when the braces are in their frontmost position and stay down while they move backwards. Then we’ll lift the feet up again as the braces reach their back positions. As long as the ground isn’t too slippery, this will move the robot forward.

The motion itself is simple. Because of the way the feet are mounted, all we have to do is move the servo for each foot back and forth to move the foot up and down from the ground. A simple sine wave, not unlike the ones that we’ve used above to move the brace. Amplitude and offset will probably have to be different to achieve the correct range of motion, but all in all still a simple sine wave. But how do we achieve the specific timing we need: move the foot down when the brace is in front, keep it down while the brace moves to the back, and then move it up again?

This seems like it works at first, but there’s a problem. In the first cycle, everything works fine. At t = 0, the brace is in the front position and the foot in the up position. When the brace is halfway through its motion to the back position, at t = 250, the foot is in the down position, touching the ground. When the brace is in the back position, at t = 500, the foot is back up again. Our robot has moved forward. But if we keep increasing the time, we see that the brace naturally starts to move back to its front position. But the foot keeps moving too! In fact, at t = 750, it’s back on the ground. That will undo the forward motion we just made. We want the foot to move only when the brace is moving from front to back, not when it’s moving from back to front.

To solve this, the miniKame code uses a little trick. It disables the foot oscillator for half of the period.

When the result of t / 500.0 is even, we’re in the first half of the 1000 tick long period of the brace, which means that we’re in the first half of its motion, i.e. the front-to-back motion. If it’s odd, then we’re in the second half, the back-to-front motion, so we simply don’t pass the oscillator values to the servo. To see this in action, activate the period filter checkbox above and move the time slider. You’ll see that the foot stays up when the brace moves from back to front.